We had a hard time deciding which was better: seeing Disney World or staying at the Four Seasons - Orlando!

We LOVE everything about Disney. And it all comes down to service. I have an old friend who has a great line about Disney: "Walt has perfected the art of extracting you from your wallet!" But the reason both kids and parents keep coming back to Disney is their service. Our good friends at Small World/Big Fun have always made scheduling the Disney experience an effortless one. In addition, we HIGHLY recommend utilizing a tour guide, and Stone Vacation Services offers superb VIP service.

Small World/Big Fun provided a comprehensive itinerary with each day planned out at a different park; and complete with lunch and dinner reservations. And Dinah, our guide from Stone VIP Tours, navigated us seamlessly through each park (both Disney and Universal), with ZERO wait-times for the lines!

I have an old friend who has a great line about Disney: “Walt has perfected the art of extracting you from your wallet!" But the reason both kids and parents keep coming back to Disney is their service."

WHERE TO STAY -- FOUR SEASONS - Orlando

We cannot rave enough about the Four Seasons - Orlando. Staying "on-site" at one of the Disney properties is certainly appealing for the convenience aspect; in fact, we stayed at one of the 2-bedroom villas at Disney's Wilderness Lodge several years ago and really liked it.

But the Four Seasons - Orlando is like a vacation-in-a-vacation. The rooms are impeccable, the grounds are immaculate and the service is 5-star.

And for our party of six, the Four Seasons was able to guarantee an adjoining room configuration. They offer "outer" connecting rooms -- we had a Park View Suite which shared a grand entry way with a regular room (either King or two doubles). You walk into a common entry and there are two doors (one to the right and one to the left) -- each with its own lock. The Park View Suite has a den area that allowed us all to gather together.

The Four Seasons-Orlando has several family-friendly options, some a bit more formal than others.

Capa is an upscale tapas-style steakhouse that offers rooftop dining and has made Wine Enthusiast magazine's list of Best 100 Wine Restaurants in the U.S. In addition, a generous children's menu is also available. Plus, even if you don't have a room on the park side of the property, you can see the Magic Kingdom fireworks from the 17th floor terrace!

Ravello provides creative breakfast, lunch and dinner fare. In the the morning it is used for breakfast buffet; and in the evening it is an Italian style restaurant

We have learned from our snow-skiing trips that it is important to schedule a "Rest Day" in the middle of a busy week of vacation (see below for more discussion).

Our first day was at Universal Studios, which is essentially TWO PARKS that can be done in ONE DAY, especially if you have a great guide!

While there are a ton of cool rides, Universal begins and ends with the Harry Potter attractions. On one side is Universal Studios Florida, which features the Wizarding World of Harry Potter: Diagon Alley. On the other side is Islands of Adventure which features Harry Potter and the Forbidden Journey. Dinner that night was at The Boathouse, wonderful atmosphere and views of the water (highly recommend reservations).

We started the first day of our Disney adventure with the original Walt Disney World park, Magic Kingdom. Four of our Top 10 rides (see below) were at Magic Kingdom -- Space Mountain, Big Thunder Mountain Railroad, Splash Mountain, Seven Dwarfs Mine Train. Having our guide, Dinah, was invaluable as she helped us navigate the park, stay at the front of all of the lines, and arranged for lunch and dinner reservations well in advance. We finished the day with a very enjoyable meal at The Wave. 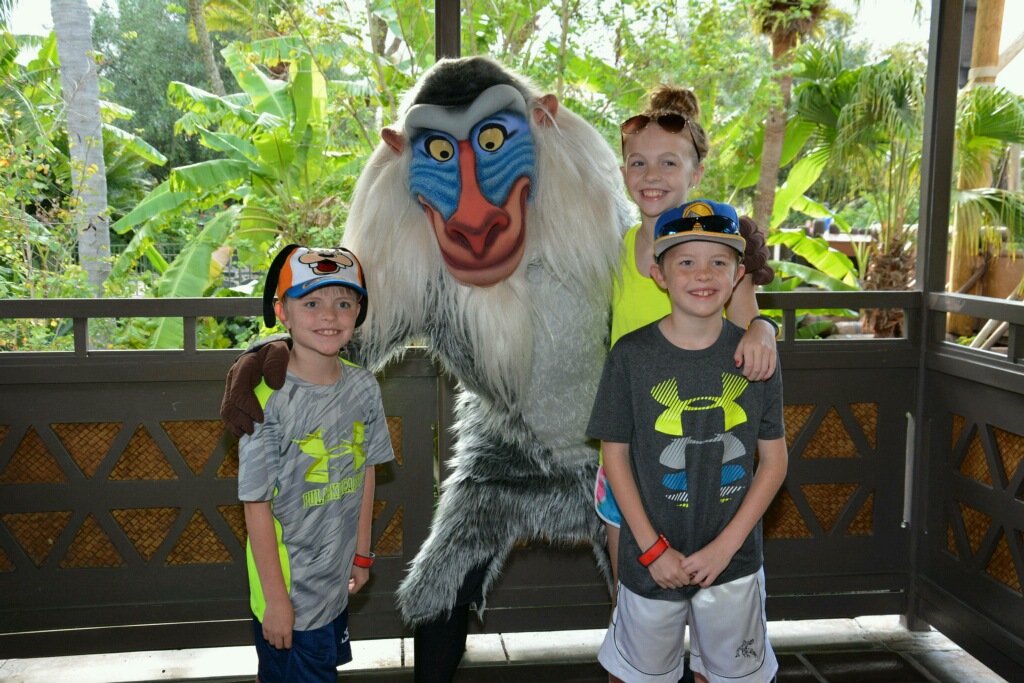 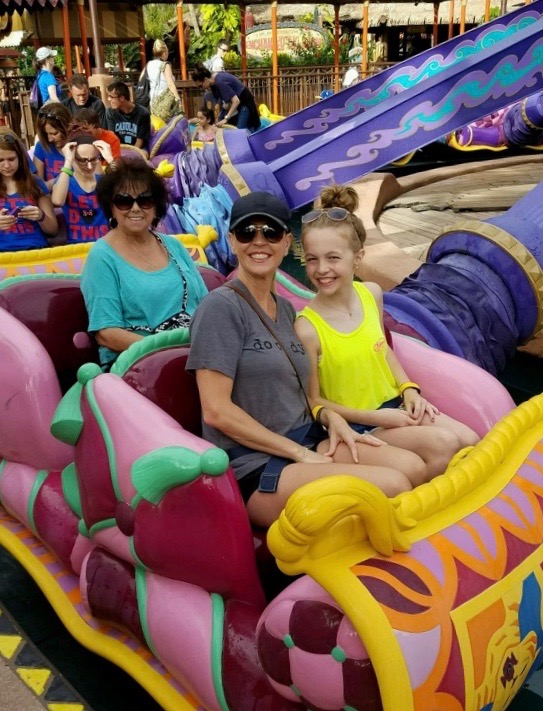 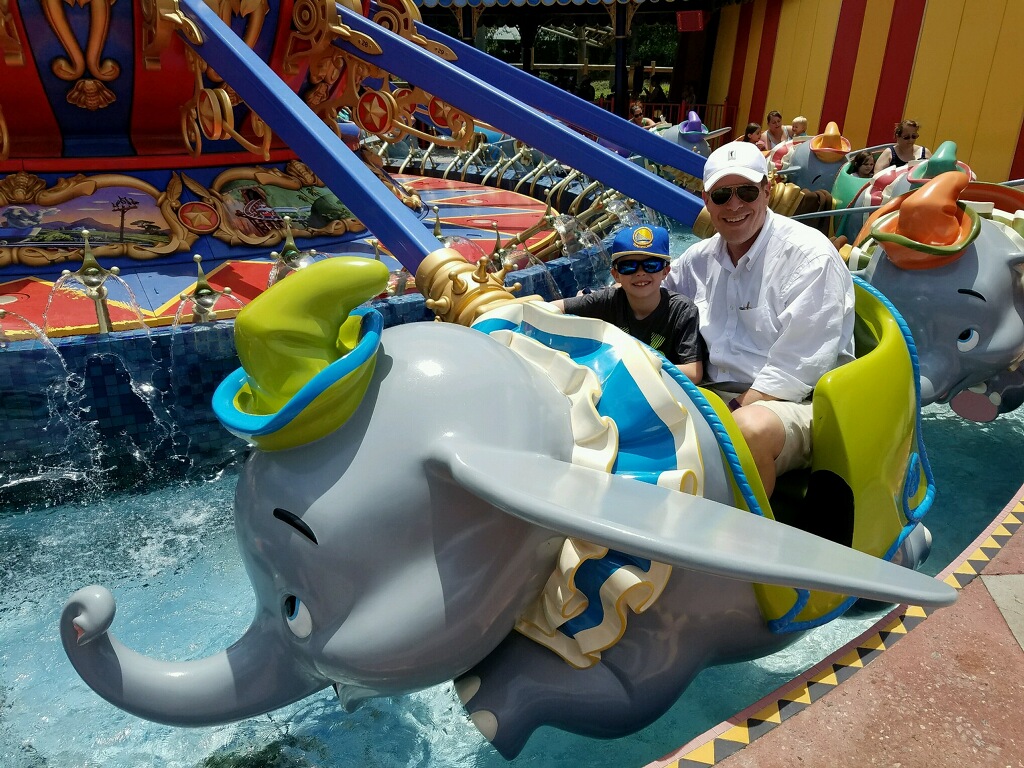 Animal Kingdom was surprisingly fun and certainly more than a glorified zoo. Expedition Everest is a great roller coaster...and we highly recommend circling back to Animal Kingdom at night. Lunch with Mickey and Friends at Tusker House Restaurant offered great character interaction!

"Napping" on Expedition Everest at night! 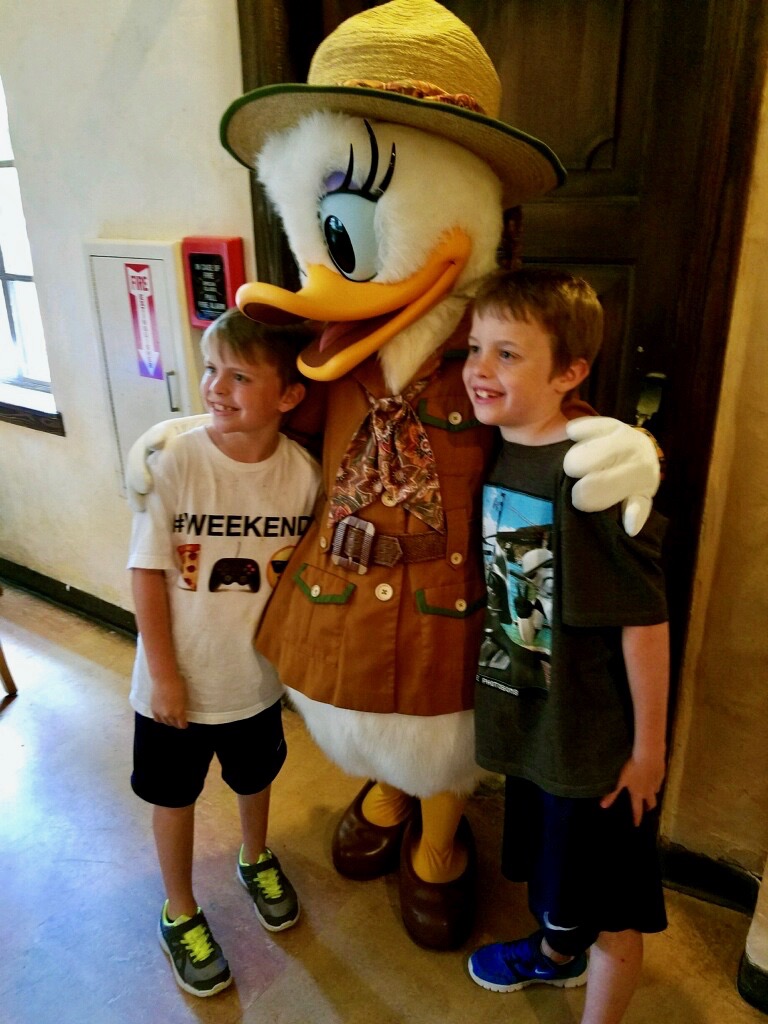 We took a mid-week break on Wednesday. While we call it a "rest day", it usually ends up being anything but! It was a chance for us to sleep in that morning and then hit the water park. The boys and I then got in a round at Tranquilo Golf Club, a Tom Fazio-designed course that is as challenging as it is picturesque. With its new $2.5 million 16-acre practice facility, it is one of the premiere courses in Florida.

Disney's acquisition of the Star Wars franchise was in full effect at Hollywood Studios. For a "throwback" lunch, we ate at '50s Prime Time Cafe. 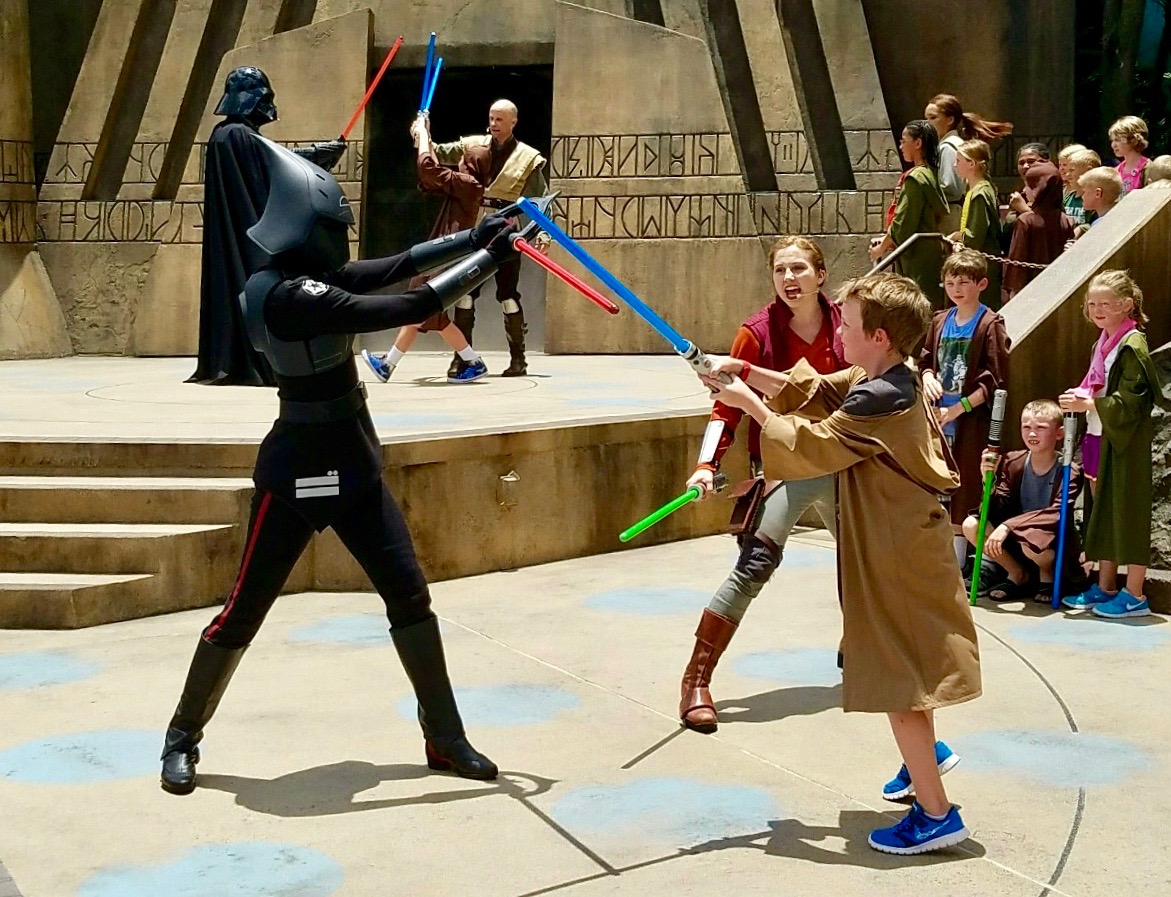 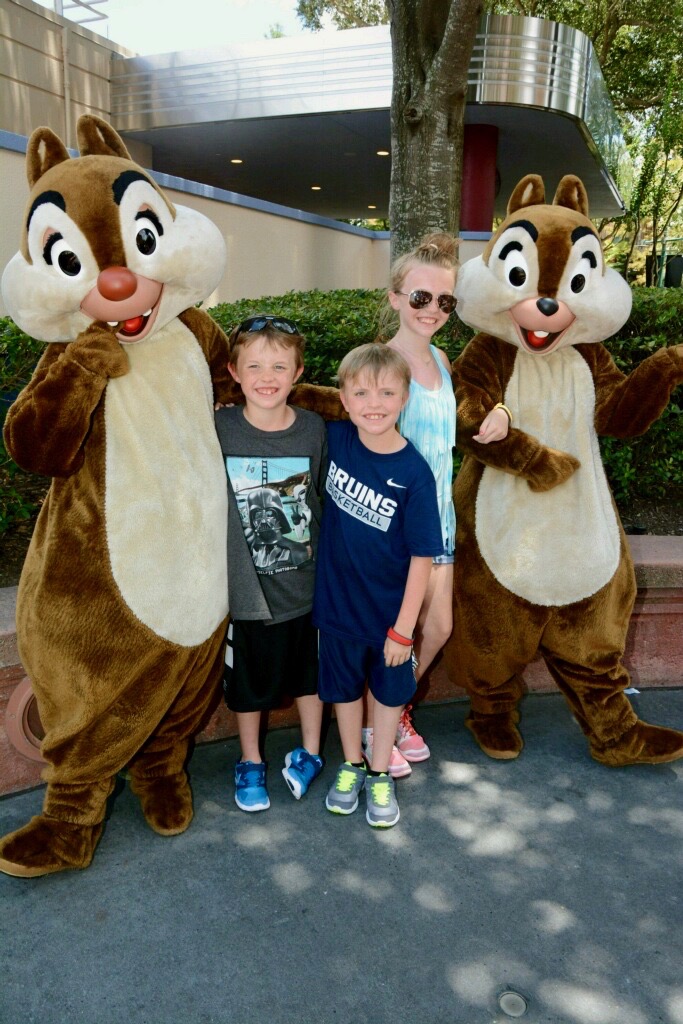 Epcot provided the most character interaction/pictures of any of the parks. We really enjoyed Garden Grill, and its rotating dining room, for lunch. We would highly recommend dinner at Spice Road Table -- be sure to get a window seat to see the fireworks. 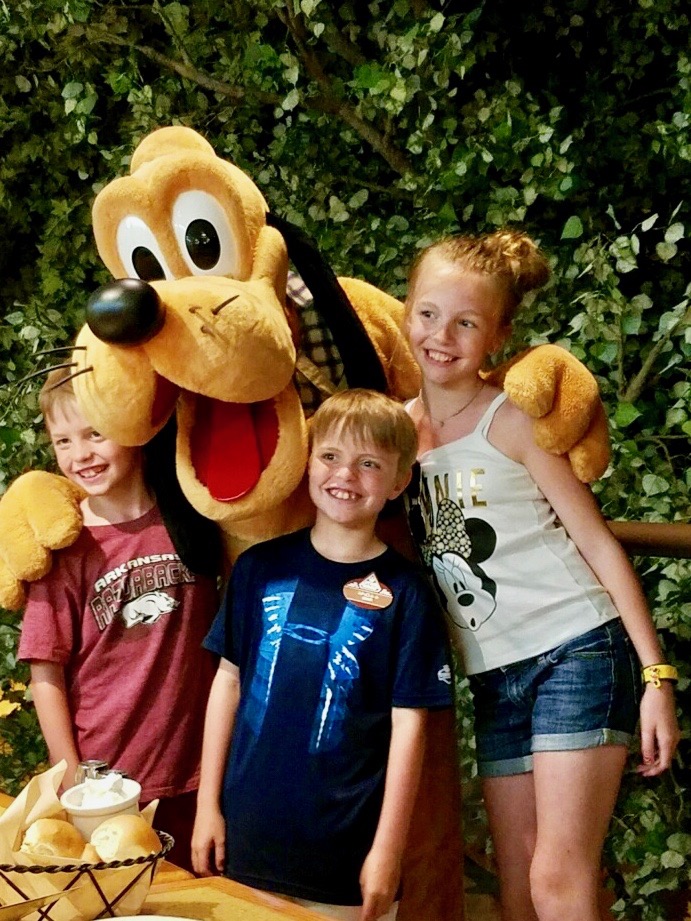 No Adventure Park blog is complete without a Top Ten List of roller coasters and adventure rides!